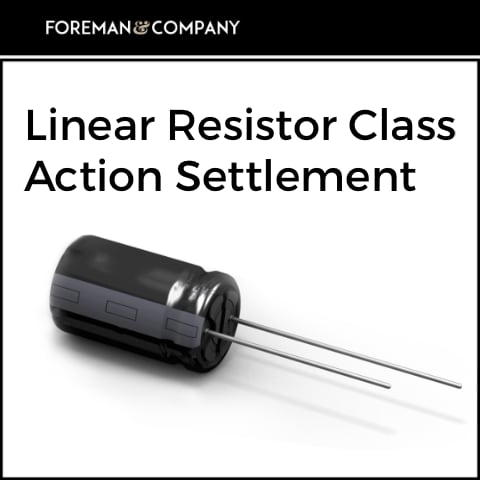 TO: All persons and entities in Canada who purchased linear resistors or a product containing linear resistors between July 9, 2003 and September 14, 2015 (the “Settlement Class Members”).
If you bought an electronic device containing linear resistors between July 9, 2003 and September 14, 2015 (“Class Period”), such as computers, smartphones, gaming consoles, home appliances and televisions, among other products you may be a Settlement Class Member and your legal rights could be affected.

WHAT DO I NEED TO DO AT THIS TIME?

If you do not oppose the proposed settlement, you do not need to appear at the hearings or take any other action at this time. In the interim, we recommend you retain all purchase receipts for linear resistors or products containing linear resistors made during the Class Period.

Should you wish to be kept up to date as these Class Actions proceed, you can register with Class Counsel at the contact information below.
If you want to tell the courts what you think about the proposed settlement or speak to the courts at the hearings mentioned above, you must send your written submissions to Foreman & Company, 4 Covent Market Place, London ON N6A 1E2 or by e-mail to [email protected], which must be received by November 17, 2021 at the latest. Contact information for Class Counsel can be found below. Class Counsel will provide all such submissions to the appropriate Court.

The courts will decide whether the settlement is fair, reasonable, and in the best interest of Settlement Class Members.

WHERE CAN I ASK MORE QUESTIONS?